This graphics card actually performed well beyond what it was expected to, at only $29.99 it was a bargain. For a minimal price this GPU has full Microsoft Direct X 10 support and boasts full Shader Model 4.0, displaying stunning graphics and more realistic effects. The unified shader core adjust processing power amongst geometry, physics, vertex, or pixel shading operations adding more realism to games and increasing performance by as much as 2X.

The main problem personally experienced with this graphics card is that when connected to the HDMI or DVI port it is extremely complicated to adjust display size to fill the screen without absurd amounts of overscan. When this graphics card was connected to my Sony HDTV via an RGB 15 pin monitor cable the screen size was automatically adjusted to its proper size (1366X768). When connected via HDMI or DVI the best native screen size I could choose was 720p. This setting gave the display considerable amounts of overscan which would cut of toolbars and the tops/sides of windows. While watching a movie or using a program in full screen mode the effects of this overscan were greatly minimized.

One more troublesome thing with this graphics card, especially with Ubuntu, is that the only drivers for it are proprietary. So if you are running Ubuntu and decide to use this graphics card you will be forced to download and use Nvidia's proprietary drivers to enable 3D acceleration and to enable Unity, Ubuntu's graphic interface.

The nvidia driver for the Geforce 8400 GS in Ubuntu 11.04 has a GUI for the settings that looks something like this. It allows you to adjust the resolution, color and many other intricate modifications. The newer driver has overscan compensation built in. 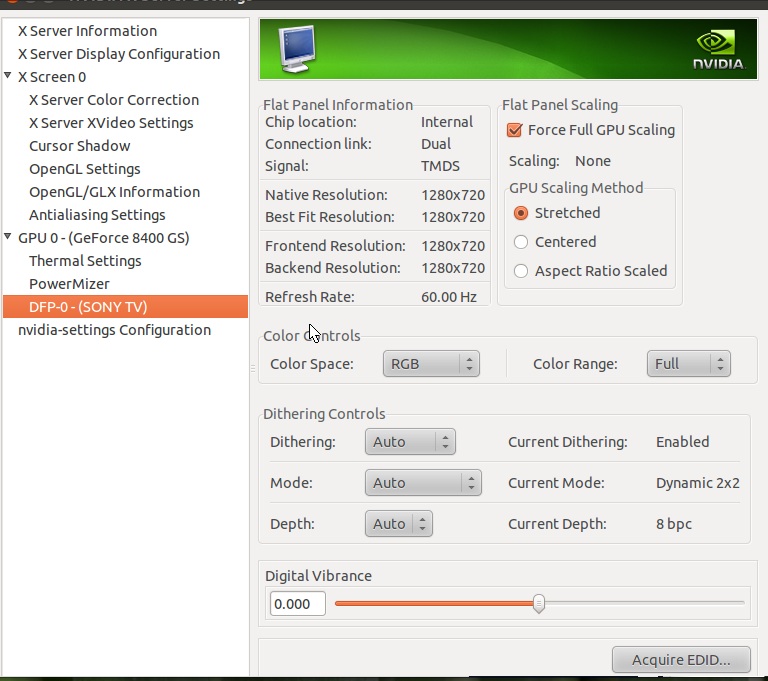 The proprietary driver for the Geforce 8400 GS also allows you to change the resolution of your display. However it will only allow you to select resolutions detected by the EDID. There are some ways to get around this. One possibility is to disable the EDID identification in a terminal window in Ubuntu. 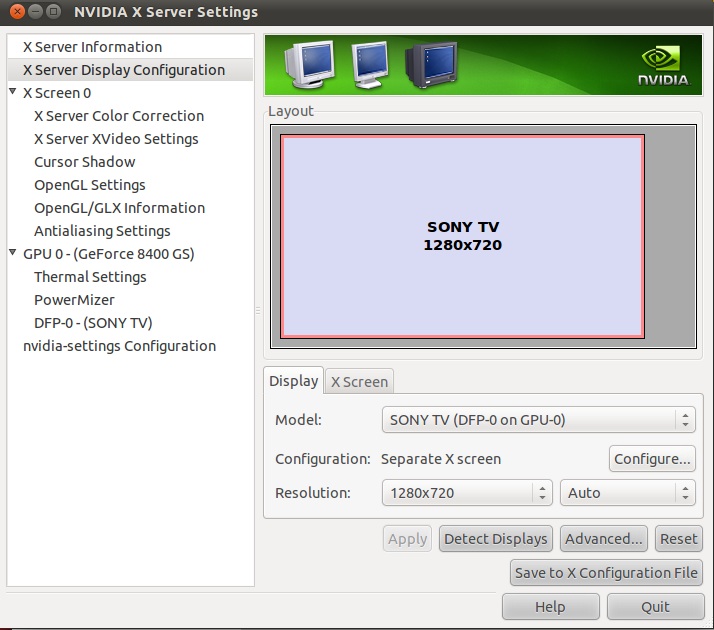 The Nvidia Geforce 8400 GS graphics card works great in my budget build hackintosh Core 2 Duo machine. These cards are available at extremely low costs considering their versatility, however this graphics card is no work horse. Streaming online videos to a Sony TV over the Sparkle Geforce 8400 GS is generally smooth and clean. With some HD videos the playback will experience a shuttering effect which is most likely due to the graphics processor being unable to handle the processing demand.

Try Creating a custom modeline by entering this code into a terminal window:

Here are the official Nvidia Drivers for all operating systems they support.

Here is the link to download the Free VNC Viewer by RealVNC.